Charles H Dow(1851-1902) ,however, neither wrote a book nor published his complete theory on the market, but several followers and associates have published work based on his theory from 255 Wall Street Journal editorials written by him.

The Dow Theory is made up of six basic principles. Let’s understand the principles of Dow Theory. 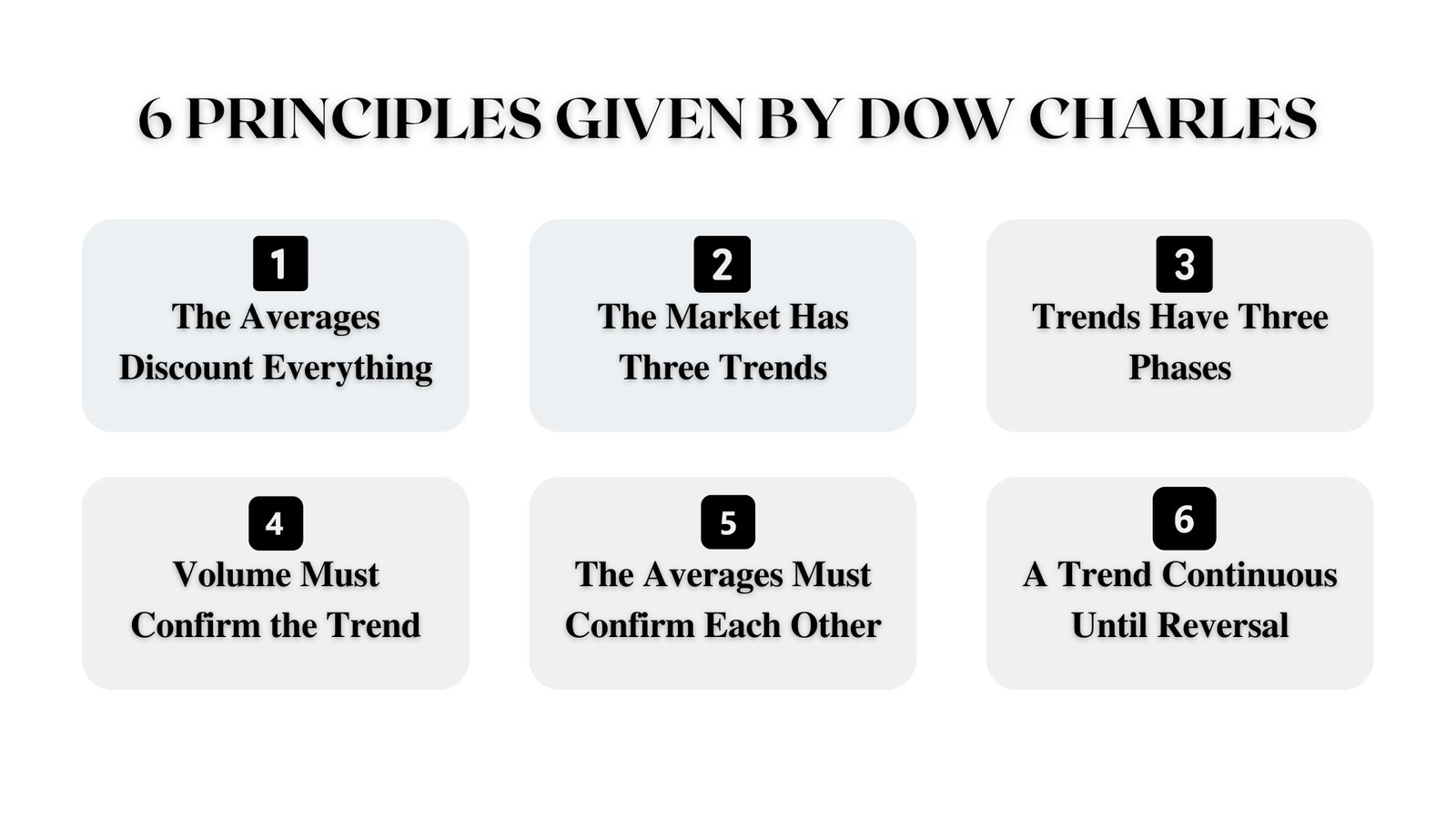 1. The Average Discount Everything

The market Price takes everything into consideration, all of the time. The value of the stock price, for example, reflects all investor sentiment – the hopes, fears, concerns, optimism, and pessimism – of all its participants. It also reflects everything else that is known about a market at any given moment. Interest rates and expectations for them are known. The current business climate is well documented, as are predictions for the future. Company earnings, and expectations, are already in the marketplace. The politics of the day and impending electoral change is already priced in. Shocks to the market, unexpected events, wars, or political upheaval, may occur. These will affect the market in the short term, but then it will return to a trend.

A trend is a general movement in a particular direction. Trend analysis is a technique used in Technical analysis that attempts to predict future stock price movement based on recent obscene data. Trend Analysis is based on the idea that what has happened in the past gives traders an idea of what will happen in the future.

In an uptrend, both the peaks (tops) and troughs (bottoms) of a stock chart keep increasing successively. So, every day or so, the stock price touches a new high and falls lower than it did previously. Don’t be a mistake; this need not be a lifetime high. It could be the highest the stock touched in the past few days, weeks, or months too. This steady rise in tops and bottoms indicates that the market has a positive sentiment. It expects the stock has a higher chance to appreciate more than depreciate. So, more investors buy, thus driving the price higher. Similarly, each time the stock falls, investors see it as an opportunity to buy even more. They don’t wait for it to fall to the previous level. They buy the stock before that. This arrests the fall.

In finance and economics, a sideways trend, also known as a horizontal trend or a range-bound market, refers to a situation where the price of an asset or security moves within a relatively narrow range over a period of time. This can be seen in the movement of a stock’s price on a chart, where the price is not generally moving upwards or downwards, but rather staying within a specific range. A sideways trend can last for various lengths of time, and is often a sign of uncertainty or indecision among investors. It is important for investors to carefully monitor the market and be prepared to adjust their investment strategies if the trend changes

A downtrend is a pattern, where a stock is falling constantly. Not only are successive peaks lower, but successive troughs are also lower. This means that investors in the market are convinced that the stock will fall further. Each little rise in the stock’s price is used by investors to sell their existing quota of shares. No further buying takes place at these levels. Such a stock must not be bought, no matter how much its price has fallen especially if you are a short-term investor. If you are a long-term investor, you may want to wait until the stock price falls further.

In such a case, peaks would be constantly higher than previous ones. (A recap, this is when the stock price touches higher highs consecutively.) Similarly, a primary trend may also be marked by a constant fall in stock prices for multiple years.

A secondary trend is a temporary price movement in the contrary direction to the primary trend. It is hard to find a one-to-three-year phase in history during which stock prices only went up without a single decline. This is because of secondary trends.

However, it cannot cause a decisive downward movement that would last for years. For example, markets are bullish about the potential of the Indian economy. So, the market is primarily moving up. Yet, there are phases when markets fall because say, lackluster corporate earnings or because a particular reform Bill is not passing in Parliament. This causes a secondary trend.

The first stage of a new bull market is referred to as the accumulation phase. To get you to thinking market psychology a little, try to imagine after a considerable sell-off, the buyers that step back in to pick up the bargains are the Pros. They have seen this type of market action before and recognize the stock prices are ‘on sale’ so to speak. They are normally the ones buying in the Accumulation Phase. No, they didn’t rupee-cost-average all the way down as the market kept declining; they didn’t buy in at the previous market top and sell out at the bottom. No, they were sitting on the sidelines with cash in hand waiting for the market to hit bottom. Once it became reasonably apparent the bottom was in place, that the risk of further decline was minimal, and the chance of a future advance was very good, then, and only then, did they risk their money.

As the accumulation phase materializes, a new primary trend moves into what is known as the Public Participation Phase. This phase is usually the longest-lasting of the three phases. This is also the phase you want to be invested in, an advancing market.

During this phase, earnings growth and economic data improve and the public begins to tip-toe back into the market. As the economy and the related news improve, more and more investors move back in, and this sends stock prices higher. These advances can last several years. Historically, there is a bear market on average every three and one-half years. Therefore, an advancing bull market should last around three years before another bear market begins.

The third phase is the distribution phase. This phase is the one that seems to always catch investors and traders unaware. The market has been in an advancing primary trend, and many think it will continue to move higher.

Dow correctly named this phase because of the trading activity going on during this phase. Remember the smart money buyers who were ‘accumulating’ during the accumulation phase, buying while there was blood in the streets? They are the ones selling in the distribution phase. The investors and traders that are often caught unaware are the ones normally doing all the buying during the distribution phase, buying from the smart money investors and traders.

Some say it is harder to call a market top than a market bottom. That is somewhat true. But a market top always has certain characteristics that can be recognized. Market tops form after a long advance. The market seems to get tired and stops advancing and begins moving sideways. The market stops making new highs. It no longer has the momentum to push higher, so it starts trading sideways and then begins to rollover. Volumes also dry up.

The participation phase is characterized by declining fundamentals, rising corporate losses, and declining public sentiment. More and more trader participates in the market, sending prices lower. This is the longest phase of the primary trend during which the largest price movement takes place. This is the best phase for the technical trader.

4. Volume Must Confirm the Trend

Dow recognized volume as a secondary but important factor in confirming price signals. Simply stated, the volume should expand or increase in the direction of the major trend. In a major uptrend, the volume would then increase as prices move higher, and diminish as prices fall. In a downtrend, the volume should increase as prices drop and diminish as they rally. Dow considered volume a secondary indicator. He based his actual buy and sell signals entirely on closing prices. Today’s sophisticated volume indicators help determine whether the volume is increasing or falling. Savvy traders then compare this information to price action to see if the two are confirming each other.

5. Average Must Confirm Each other

Dow, referred to something called Industrial & Rail Averages- this meant that no important bull or bear market signal could take place unless both averages gave the same signal, thus confirming each other.

To understand this better- the Dow Transportation Index was seen as a key gauge of economic activity- as the US rail network was extensively used to ship goods. With factories dotted throughout the country, the rise or fall of rail use was considered an important indicator. Dow said one should correlate the Dow index & Dow transport index.

Dow’s idea of seeing confirmation between two stock indices holds value even today. Taking those two indices as an example, Dow said that when both were moving in the same direction, it provided greater confidence compared to times when there is a divergence between the two. It makes sense to look for confirmation utilizing the case of whether both create higher highs and higher lows for an uptrend. Nowadays traders may wish to look for alternate markets, yet the notion of using correlated and related markets to find confirmation remains valuable.

6. A Trend Is Assumed to Be Continuous Until Definite Signals of Its Reversal

This tenet forms much of the foundation of modern trend-following approaches. It relates a physical law to market movement, which states that an object in motion (in this case a trend) tends to continue in motion until some external forces cause it to change direction. A number of technical tools are available to traders to assist in the difficult task of spotting reversal signals, including the study of support and resistance levels, price patterns, trendlines, and moving averages. Some indicators can provide even earlier warning signals of loss of momentum. All of that notwithstanding, the odds usually favor the the existing trend will continue.

Mr. Chartist is solely dedicated to learning the financial market. Our objective is to improve financial literacy. Since we are practicing Technical Analysis on a personal level we will be providing chart-based study in our weekly Chartbook for educational purposes only.

Users of this website are expected to consider this as a blog only for Learning/Education and not to misread it directly or indirectly as any buy/sell recommendations.

Please consider the Risk involved in equity markets. We do not take any responsibility for your profit or loss.​

www.mrchartist.com is solely dedicated to learning the financial market. Our objective is to improve financial literacy. Since we are practicing Technical Analysis on a personal level we will be providing chart-based study in our blogs for educational purposes only. Users of this website are expected not to misread directly and indirectly any buy/sell recommendations.

Mr. Chartist is solely dedicated to learning the financial market. Our objective is to improve financial literacy. Since we are practicing Technical Analysis on a personal level, we will be providing chart-based study in our website contents for educational purposes. Users of this website are expected not to misread it directly or indirectly as any buy/sell recommendations.